The Return to Treasure Island

Jim Hawkins is lured back to the Caribbean in 1758 by Long John Silver, only to discover baffling clues to a treasure hidden by a great Chinese fleet in 1421. They join with two intrepid young women to solve the keys to the treasure: the escaped slave Tabitha, living only for revenge on the Commandante who killed her mother, and Meilu, last of a Chinese colony abandoned on Cuba’s shore four centuries earlier. Together, the company discovers the message coded in four seashells carried in his sea chest by Billy Bones, rescues Tabitha from the dreaded dungeons of Havana's Del Morro Castle, battle Chinese mercenaries from Shanghai pursuing the same treasure, and in the end face the Sea Goddess Ma Tsu, guarding an emperor's treasure of jade, silk, and porcelain in a sea cave beneath Del Morro Castle.

First three chapters of The Return to Treasure Island

"The bar silver and the arms still lie, for all that I know, where Captain Flint buried them; and certainly they shall lie there for me. Oxen and wain-ropes would not bring me back again to that accursed island."--Ch. 34, Treasure Island, Robert Louis Stevenson 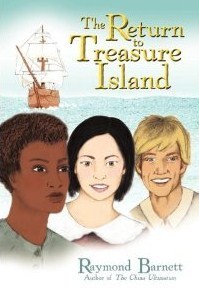