Winter 1948. Communist armies of Mao Tse-tung surround Peking, as its warlord Fu Tso-yi bargains to save the city. Police Inspector Bei Min-jen also has a problem: a string of courtesan murders in the city's most exclusive brothels. Bei's investigations lead him to a mysterious Taoist temple in the Western Hills, and the growing realization that the murders and the seige are related.

"The twists and turns of plot, the colorful detail and the explosive conclusion put Jade and Fire in the class of Forsyth and Le Carre thrillers."
--Far Eastern Economic Review

"A tour-de-force in heart-stopping writing."
--The Milwaukee Journal

"Through 369 pages of turmoil, love, jealousy, passion, political furor, and personal witchery, the author weaves a novel that is little short of masterful...a nice, long, one-in-a-million journey through one of the top five historical novels of the year."
--The Macon Beacon

"Call it a mystery novel. Call it espionage fare. Call it a succinct seminar on the Chinese Communist revolution. Call it a grounding in Chinese history and philosophies. Call it a superb mingling of fiction with fact.

"Whatever, you must call Dr. Raymond Barnett's first novel 'extraordinary.' What a wonderful opportunity to get lost in a great reading adventure, comforted by the fact that most of it is true and that one is being immersed in the oldest continuous civilization."
--Shirley K. Sullivan

"In this, his first book, author Raymond Barnett has written not only a fine historical novel, but a darn good mystery story--a tale that grips the reader on the first page and refuses to let go until its breath-taking conclusion...Yes, Barnett's story is unusual. But it is also entertaining. One gets the feeling, as the plot unfolds, of having read a truly unique book, a double treat of experiencing living history and a Far Eastern Sherlock Holmes at work.

"Barnett, who received his B.A. degree in Chinese history at Yale University, does a masterful job of bringing the old China and its inhabitants to life. His descriptions of the cold, northern city under siege are both real and hauntingly poetic. What he presents us with is an unusual story of the mysteries of ancient China confronted by the blood and fire of war, a country on the brink of irreversible change, whose culture is both dying and experiencing rebirth at the same time...a tour de force in heart-stopping writing."
--The Milwaukee Journal

"It is this place, Peiping, these few historic moments, December 1948 to January 1949, General Fu against the communists, that Raymond Barnett captures in such richly textured detail in Jade and Fire, the most engrossing, vivid, and sound piece of historical fiction on China by a Western writer to appear in many years....

"The twists and turns of plot, the colorful detail and the explosive conclusion put Jade and Fire in the class of Forsyth and Le Carre thrillers."
--Far Eastern Economic Review

"Jade and Fire is a suspenseful and gripping novel which creates an aura of methodical relaxation, in the Chinese way, while the plot moves swiftly through 1948 and '49 as Mao Tsetung's Communist forces battle for control of the nation.

"Author Raymond Barnett spins his yarn and keeps the plot moving, despite--or, even while--accurately depicting the Old China mentality in which Chinese aristocrats speak in opposites of what they mean... The result is a sort of fast-paced, well-written narrative of the Charlie Chan genre.

"Besides being set in an excellent historical basis, the novel's plot about a Confucian detective's plodding determination to solve a bewildering murder case is vividly portrayed. It's a great book."
--Asbury Park Press

"Barnett's depiction of old China and its inhabitants is the real star here--and it shines, making this an unusual, satisfying entertainment."
--Kirkus Reviews

"It is the Peking of late 1948, the twilight of the Nationalist regime. The monks of the city's largest Taoist monastery burn their prior alive in the courtyard. Bei Jemjin, chief inspect of the Peking Municipal Police, tackles the case with a briskness and authority that recalls Thatcher Colt, Anthony Abbot's police commissioner, who solved similar public crimes in 1930's New York...General Fu, Nationalist commander of Peking, takes over the story and educates us on military tactics as taught by Sun Tzu, and on sex, with the help of a beautiful Communist agent from another Taoist monastery...The reader will learn a lot about Chinese history, Taoism, tea drinking and Peking art and architecture in this first novel by a California biologist."
--New York Times Book Review 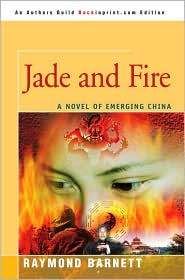